My October Rug is up for auction right now! 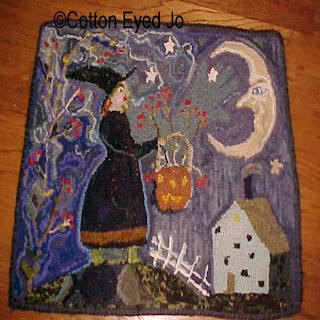 When I finish a rug for selling, it is near and dear to my heart. For that reason, and especially if I feel there is something special about it, my willing to part with it price is higher. It is now almost a whole year since this rug was completed, and it has been taken to the Green Market, and displayed at a couple of shows. It has not been used as a rug in my home. So it is new, even after celebrating its' first birthday. But it is also time for this rug to have a home. Starting bid is the lowest it will ever be, no reserve, and I'm seriously thinking about sending it to Lori if it doesn't sell this time...  Lori is the original designer of the artwork that inspired this rug. I got the pattern from Spruce Ridge Rugs who is allowed to offer Lori's designs as rug patterns. I'm interested in a couple of other patterns, and a piece of jewelry from Hannah Willow, so an old fashioned bidding war would be grand!

The right side of the rug is hooked with more control, and somewhat more muted colors. This side of the rug represents the little witch's everyday life. So lines are straighter, shadows realistic and so on. The left side of the rug represents a magical moment as this "witch draws down the moon". So the hooking is more chaotic and there is evidence of what is happening. Down her spine runs a brilliant blue line, where the power is flowing through her. Her hand is extended, but worked in a blue similar to the background so as to be somewhat camoflaged. Behind her the colors are swirling and richer, and the shadow she casts is the Triple Moon symbol favored by Wiccans.

I love to watched CHARMED  and fantasy has always been my favorite reading genre.(Lord of the Rings, Dragonriders of Pern, etc) but the thing I love best about Charmed is that these witches are on the side of good and vanquish demons. Plus the stories are often funny, costumes cool, and just the general concept intrigues me. Some of the music in my playlist is Wiccan, and that took a decided upswing after I went to Avatar. The spirituality of the movie may have seemed unlikely to you, but that was part of what really connected with me. Growing up on the plains of Nebraska, learning to do Indian beadwork, teaching about Native American traditions(very limited way) deeply connected my soul to the Earth. Sure, I don't really like to sweat,  so a sweat lodge would definitely not be high on my list. LOL As I said earlier, fantasy has always been strong in me.
Posted by Cotton Eyed Jo at 7:52 PM

That is a beautiful rug, I have always loved it. I read those books too and I think it is amazing that you learned to do Indian bead work.
I hope it finds a good home. It needs a good home as it is a work art.
Did you see Avatar in 3D? I wish I had.
It is one of my husbands favorite movies.

We did see it in 3D, and it was an amazing experience. So much of how we react to a movie, depends on what we personally bring to it.

I was lucky enough to be at Scout Camp a few summers while my dh was a camp director. Working on his Indian costume was when I did the bead work. There was a guy on staff who visited reservations and taught beading to Native American kids. He was a great teacher, and made me feel very much a participant in their traditions.

Kim, I'm so glad you weren't put off, or at least hope so, by my admission of being so drawn by magic. I would never have the courage to vanquish demons, unless they were trying to harm someone in my family.

"To fight to the death for that wish we love, in a cause surely hopeless for that which we love" is a phrase from some book I read long ago. It pierced my heart with it's beauty and truth. Although only those who love deeply might feel it true. Many of my Playlist choices speak that same truth, though not so mortally.

Dear Jo, No wasn't put off at all, I am a Christian as you can tell by my blog, but sometimes, I think we limit God by putting Him in a box and not paying attention to the super-natural that is all around us.
I have been trying to understand the idea that there are 9 known dimensions, I know that over and over in the Bible God talks about seeing through a mirror darkly and that it has been proven we live in a digital simulation.
Sorry if this sounds as nutty as it looks as I am writing it out.
I guess it would be simple answer this is not it and there are seen and unseen things around us but we with our finite minds cannot grasp it.
Because my kids want answers about what is beyond time and space, I have been looking into that.
I think, okay something nutty coming, but I think within all oral tradition there is a nugget of truth. Think Marco Polo, he tried to describe what he saw and was branded a liar and a fool, yet later, things like restaurants, giraffes, became known to us.
I have studied enough ancient documents to know that there are things that just can't be explained.
So now if I have not just completely freaked you out.
I just wanted you to know that I love reading about what you are thinking about. I have a friend in England and when we met, she knocked my socks off because we were so different, but in our friendship she taught me that it is so nice to have other viewpoints and to listen and in that listening our minds can see the world in a better way.
So, I do hope I don't scare you by my nutty ideas they are a bit far fetched, but they are fun.
I do like your music very much too.
Some of it is just so hauntingly beautiful.
I am glad you write what you do because I sit and think about it and someday, I can ask you questions when I start dyeing wool. :)
Nope, you are a blessing to me.
Kim

Just sent you a huge comment about why I was not put off by anything in your post and google told me it was to large and ate it. I think.
So, I will do it again later as my time is gone and I didn't know you could write too long of a comment.
I just wanted you to know that I thought it was a sweet post. I liked it. :)

Thank you for taking the time to reassure me. You might not guess that I consider myself a Christian too. I accepted Christ into my heart years ago, and when Transcendental Meditation was popular during the last century. LOL love saying that Anyway, I quit after finding out that part of the training was supposedly a Buddist equivalent of baptism. Perhaps Hindu, maybe my friend was wrong, my memory isn't the best, but that was a deal breaker for me. So heretical as my thinking is, I still have Christ in my heart. The song "what if God was one of us" reminds me of the injunction to treat strangers with kindness. It is a great song...

Any knowledge I have, I'd gladly share with you. Ask away...dear friend.