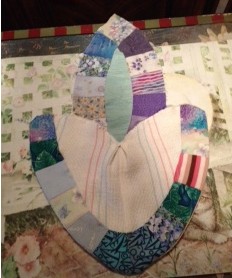 Did you ever have an idea of something you wanted to make, that didn't turn out quite like you'd hoped, but in trying to figure out something to rescue it you came up with something you like even better? Voila! This block I'm calling 10th Anniversary Basket, and it won't be a quilt, just a mini quilt. I haven't seen it done anywhere else, so think perhaps the idea is my own intellectual property wise.

Our Daughter and Son~in~Law will celebrate their 10th in almost exactly a month.  So I'm ahead of the game at this point.  I used a left over block from their wedding quilt for the handle, and created the basket, from two parts of receiving blocks. In each arc of the basket sides, I included a small piece of baby clothes. and the fabric which were representative of the two of them. His, although he is not a morning person is the dark green and purple morning glory piece. Hers is a pale periwinkle and most easily spotted on the left side of the basket. Nestled between the two pieces you'll spot a pink, brown, and white striped knit sleeper on the right, and a pale blue portion of his Baptismal coverall on the left. Don't gasp, most of it is going to be securely sewn into a memory quilt, so I cut the tiny piece from the back. I generally make memory quilts from baby and toddler clothes into an actual quilt design. But lately I've seen a newer style, where most of the actual piece of clothing is sewn to a backing. So this is more my own style. It was supposed to be a heart, and does have somewhat that shape, but I like the idea of a basket so much better. 10 years holds lots of memories, and their two kids! :)

Another thing I plan to do is use some of the scraps for a mat for some of their babies pictures. When I finally get something together, will share that too.

The feeder bands are finally starting to bring in heavier rain, so I'm off the computer and back to work at the sewing machine... while we still have electricity. :) I know the picture is terrible,  but I may try to create a pattern for it.

It looks so pretty. The colors look to me like ocean.
I hope you don't loose your electricity and you get to have a nice rainy day project. Happy 10th to your daughter and son in law.

The palette for their double wedding ring quilt was hydrangeas. I took pics and saved them to the computer 10 years ago! Need to take some new pics, cause 2 computers later, I have no idea where they were saved. Tee hee.

The rating for Supernatural is TV-14. It's mostly different monsters the first season.and If you have Netflix they have all but season 10. Once Season 11 is released the newer episodes (season 10) will be added. Funny, scary, and LOTS of pop culture references.