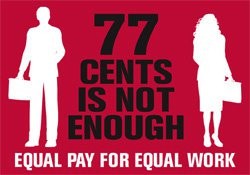 April 12th is  Equal Pay Day, the day that marks how much longer working women need to work to catch up to their male counterparts’ income from the previous year.

That’s right. A woman has had to work an extra three months this year to match a man’s income in 2010. Minority women have an even greater disparity in their wages.

To acknowledge this staggering discrepancy, fair pay supporters nationwide will wear red April 12th to symbolize that women’s wages are “in the red.”


So many women are the heads of households, especially in minority families.
Posted by Cotton Eyed Jo at 9:01 PM