Red River turned out to be more like Pink Grapefruit, so Ruby Red! :)

Well, it isn't the orange I was hoping for.... but Ruby Red/Pink Grapefruit. I'll be photographing them soon, but they were really a surprise! Was hoping for a nice burnt orange with those deep golds and dark reds.  A mottled red orange from lightest blush to a dark shade. This dyeing adventure is really fun, but this isn't an orange for just any project. Oh well. Guess it was bound to happen... Definitely will have to tone the red down for this to be a great pumpkin or utilitarian orange.  Believe it or not, I've already been using some of these in a rug for our granddaughter's 3rd birthday. The Karen Kahle "Waterlilies" It might be too bright for many folks, but these tones make a gorgeous waterlilly to me. I'll try to get a pic of the rug so far later today... 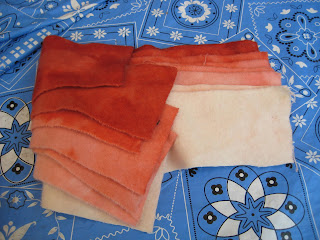 After thinking about it for a short while, I decided to reformulate the yellow. I have the recipe for the original batch which had lots more deep gold tones than the one in the pot at the moment :) seems to have. After they cool down and I finish rinsing, drying them I'll add a new post. 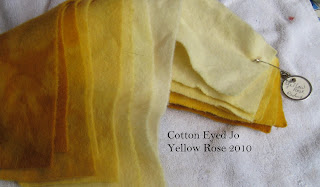 Here is a picture of my reformulated yellow dye. I'm calling this one Yellow Rose in my official TX Palette. One of the light shades is the exact color of lemon ice box pie! The second picture is my new orange, the change is subtle, and really not at all obvious in the picture, but the oranges combining the red chilies and new yellow rose formula has a warmer more yellow quality to it. The Orange is called Red River in my official TX Palette. A friend said that some of the shades are exactly the shade of the red dirt in East TX, which I was privileged to see as I drove to Tyler for Star of TX rug camp. I'm much happier with this orange. One of the shades reminds me very much of orange pop! As a girl, that was one of my favorite flavors ~ especially if it came out of one of the old time pop coolers, where the bottles hung down from a metal rack into a gigantic pool of crushed ice and water. They were especially good and cold after riding in a car with no air conditioning other than the rolled down window.