I finished my Retirement rug! 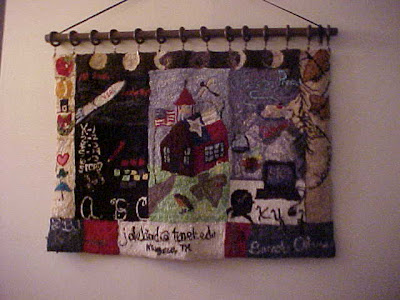 It is finally finished. The edges are turned under, and it is hanging on the wall. This rug is actually a primary source! I started my teaching career in 1968, and taught until 2008. During that period of time, we landed on the moon, the internet became available for use by schools, and our first African American President, Barack Obama, was elected! At the bottom, you can see a white section, that has my first email address acquired somewhere around 1990 or so. To the right you can see portions that include my two favorite internet projects. The Jason Project, which we did at Hidden Hollow Elementary in Kingwood, TX and Journey North(my absolute all time favorite internet project).

But there is so much more hidden in the symbolism of this rug. For example you probably notice that the 3 central parts have different colored backgrounds at the bottom. They are black for slate, green and white. My first school actually had the same style slate boards as when I went to school as a girl. After moving to Texas, and returning to newer school there were green chalkboards, and eventually the magnetic white dry erase boards. On the first you can see A, B, C in white for the white chalk we used. The middle section has j,k,l, in yellow like the anti glare yellow chalk that became popular. Those letters happens to be my initials and the middle of the alphabet and at the end W, x, y, z. You might have already figured out the profile is one of my favorite presidents, George Washington. If you haven't read a biography of his life, you should give yourself that pleasure.

The school house in the middle section has a dragonfly zipping along above it. TX roof, because the larger part of my career was here in TX. Dragonfly because, well, if you know me, you know that :)...

To give some perspective to its size which is roughly 30 inches by 50 here is a pic of a part of the rug and a French Door leading to our dining room. If you peek through the door, you can see light reflecting off the top of my dh's bald head. He hung this finished rug for me today. Not quite a year after the date I retired after 35 years as an elementary teacher. 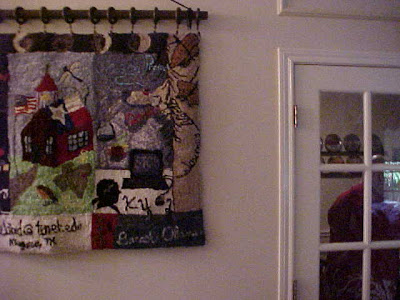 Your rug is absolutely amazing Jo!! What history! - HUGS -

Jo, your rug is amazing. It's like a time capsule. That will be a treasure in your family for generations.

The first thing that went through my mind when I saw this was WOW!!!!
You do such beautiful work Jo!!!
Just Awesome!

A wonderful rug to enjoy for many years to come. A priceless heirloom!

Beautiful! I love the rug; your memories; your gift in telling the story of your teaching career through an art form.